Think of wire wrapping as a permanent (Although revisable) form of bread boarding.  It is a technique for producing highly reliabe low cost / low run count electronic assemblies.  In fact, it was so much so that it is the technique used for the Apollo guidance computer used to go to the moon and that survived a rocket launch.  With its roots in the 1800s wire wrapping has been around for a long time.  It really hit its stride though in the 1960s and 70s.  Many of the first computers were built using wire wrapping instead of the now common printed circuit board (PCB) methods of today.  It was popular with hobbyists and makers of the day and was the goto method of producing a new design.  Now however, with the advent of bread boards and inexpensive PCB manufacturing wire wrapping has crept into the corner, left and forgotten.  But no more.  Lets shed some light on this lost technique.

The idea behind wire wrapping is simple, Take a wire (30AWG usually) and wrap it tightly around a square header pin, then route the wire to the other end of the connection and repeat. It couldn’t be easier. There are two techniques for wire wrapping, a traditional method and a modified method.

In traditional wire wrapping of 30AWG wire, 7 turns of uninsulated wire are wrapped around a square post. In modified wire wrapping, you wrap 7 turns of uninsulated wire plus another 1/2 turn of insulated (MIL-STD-1130B). Modified wrapping provides built in strain and vibration resistance, resulting in a more robust wrap. For other gauges, please reference the table below (Copied from MIL-STD-1130B)

There are, as with any tool, the basic (Read Hand Tool) all the way to the advanced (Read Power Tool). We are probably not doing enough wire wrapping to justify buying a power wrapper, so we will stick with the hand driven version. You will need two tools to wire wrap. You will need the wrapping tool itself which looks like a screw driver and solid core silver plated wire, specifically made for wrapping. Please heed this last point. If you get sub par wire, the connection will not be a good and you will most likely run into corrosion issues down the road. Stick with a good wire wrap specific wire. Here are my suggestions for tools and wire (They are the one I use).

As I hinted to earlier wire wrapping couldn’t be easier. Technically you should wire wrap around specifically machined 0.025in square posts, but this technique works just as well around your standard Raspberry Pi or Arduino type headers (My primary use). To start, you will want to strip approximately 1 in of wire. The tool recommended above comes with a wire stripper in the center for 30 AWG wire. On the tip of the tool, you will find two holes. The large center hole is for the post you are wrapping to rotate in while the second hole is for you wire. To begin, take the stripped wire and insert it all of the way into the wire hole. The end will come out of a hole in the side of the tool head and the insulation should rest firmly against the edge of the wire hole.

Now, place the tool on top of the pin you wish to wrap. Push the tool down slightly and hold the loose end of the wire (The end going to another connection) still with your thumb so that it doesn’t move. Now, twist the tool the required number of turns (7+ for AWG). Once done, remove the tool and inspect your work. If everything went well you have now made 28 solid connections (1 connection per corner, 4 per turn around the post).

If you ever need to reroute the wire or replace it, you can use the same tool to unwrap and loosen the connection, then just slide the wire off the pin. Please note however that you should use a new wire when you are reinstalling to avoid fatigue and corrosion concerns. The ability to rework is one of the greatest points of this technique. It is just as good as soldering but allows you to be more dynamic in your build. If you make a mistake it is far less painful to rewrap then to solder wick. It should also be noted that you can put multiple wraps on one pin. You would be hard pressed to get more than two on a standard header but you can get longer headers. A standard proper wire wrapping pin has enough room for three connections. These pins can be had from places such as DigiKey. 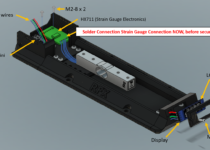 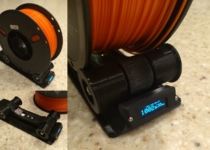 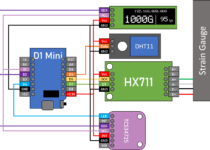